The Carrie Diaries Wiki
Register
Don't have an account?
Sign In
Advertisement
in: Characters, Minor Characters, Female Characters,
and 4 more 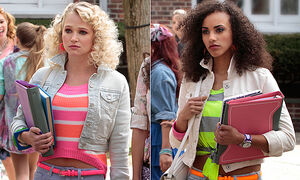 They are Donna's Minions.

In Too Close for Comfort, Donna asks for a mascara wand and realizes that the blonde Jen, is different and she says that the other Jen moved. She says she prefers Jennie, but Donna says that she will still be called Jen.

Very mischevious and submissive to their Queen Bee, Donna LaDonna.

They are Donna LaDonna's two minions. They follow her around in explosions of neon doing whatever their leader tells them to.

While dating Donna, he and the Jens became sort of friends.