The Carrie Diaries is an American television teen/period comedy-drama that aired for two seasons on The CW from January 14, 2013 to January 31, 2014. It is a prequel to the HBO television series Sex and the City and based on the book of the same name by Candace Bushnell. The first season focuses on Carrie Bradshaw (AnnaSophia Robb) during her junior year of high school in 1984 as she explores life in New York City while interning at a fashion magazine, while the second season focuses more on her expanding life in the city as well as the lives of her friends.

The pilot was picked up by The CW to a series order of 13 episodes in May 2012. Four months into the first season, the network renewed The Carrie Diaries for a second season, which premiered in October 2013. On May 8, 2014, The CW announced they officially cancelled the show after two seasons. 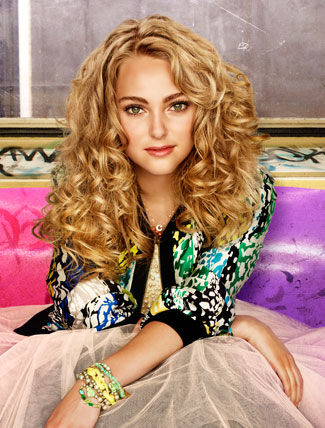 Before she was a fashion icon, before her column in the New York Star, before Mr. Big, Carrie Bradshaw was an innocent 16-year-old girl living in suburban Connecticut. The year is 1984, and Carrie’s mother has just passed away over the summer, which means Carrie has to grow up fast. Her younger sister Dorrit is more rebellious than ever, and their father Tom is overwhelmed with the responsibility of suddenly having to care for two teenage girls on his own. Carrie’s friends – sweet, geeky Mouse; sarcastic and self-assured Maggie, and sensitive Walt – make life bearable, but a suburban life in Connecticut isn’t doing much to take her mind off her troubles. Even though the arrival of a sexy new transfer student named Sebastian brings some excitement to Carrie’s world, she is struggling to move on from her grief. So when Tom offers Carrie the chance to intern at a law firm in Manhattan, she leaps at the chance.

The energy of New York City turns out to be exactly what Carrie needs, and her eyes are opened wide at the glamour and grit all around her. When she meets Larissa, the style editor for Interview magazine, she’s thrilled and inspired by the avant-garde club culture, performance art and amazing individuals that make up Larissa’s world. Larissa becomes an instant role model, and her influence gives Carrie a new perspective on every relationship in her life.

While Carrie is experiencing new things, her friends are facing their own challenges. Carrie’s friends Maggie and Walt have been a couple for two years, and though Maggie is more than willing to take the next step, Walt keeps putting off sex while he struggles with his own identity. It’s hard for Carrie because she loves them both, and what she doesn’t know is that Maggie is hiding a secret – her affair with an older man. Adding to the drama surrounding first sexual encounters, everyone in the group is surprised when studious, reserved, over-achieving Mouse suddenly confesses that she and her Princeton-student boyfriend had sex – and that he’s been avoiding her ever since. Though she’s trying to be there for her friends, Carrie has her own new romance with Sebastian to think about. Beneath his cool, bad-boy exterior, Sebastian has known his share of hurt. He reveals to Carrie that his own mother recently left the family, so he understands the sense of loss that comes with losing a mother. Unfortunately for Carrie, Sebastian’s good looks also catch the attention of the most popular – and most experienced – girl at school, Donna LaDonna, who immediately sets out to challenge Carrie for Sebastian’s affections.

On the home front, Carrie and her sister Dorrit are still clashing as they come to grips with their mother’s passing in different ways. Dorrit’s pain – along with the fact that she is 14 – leads her to rebel against all authority figures, while Carrie is doing her best to keep up the illusion that everything is fine.

Carrie’s next challenge will involve the internship that has opened up this new world to her. The job at the law office means nothing to her, but being in the city means everything, and she will soon have to decide whether to defy her father, leave the law office and take the first step toward a writing career. For young Carrie Bradshaw, friends and family will always have a big place in her heart, but she’s suddenly seeing everything in a brand new light, thanks to the most important man in her life – Manhattan.