The Carrie Diaries Wiki
Register
Don't have an account?
Sign In
Advertisement
in: Sex and the City

Sex and the City Films

There were two Sex and the City movies. 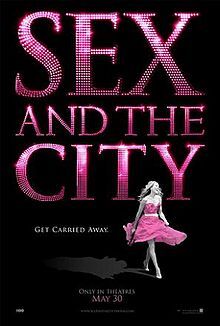 Sex and the City is a 2008 American blue romantic comedy film adaptation of the HBO comedy series of the same name (itself based on the novel of the same name by Candace Bushnell) about four female friends: Carrie Bradshaw (Sarah Jessica Parker), Samantha Jones (Kim Cattrall), Charlotte York Goldenblatt (Kristin Davis), and Miranda Hobbes (Cynthia Nixon), dealing with their lives as single women in New York City. The series often portrayed frank discussions about romance and sexuality.

Carrie walks through the streets of New York City thinking about events that have happened to her and her friends during Sex and the City. Charlotte is now living a happy marriage with Harry Goldenblatt, but she had a hard time getting pregnant, so they adopted a girl named Lily; Miranda has settled down in Brooklyn with Steve to raise their son Brady together; and Samantha has relocated her business to Los Angeles to be close to Smith, who is now a superstar, although she misses her old life and takes every opportunity to fly East to be with Carrie, Miranda, and Charlotte.

Carrie herself is now in a relationship with Big, and they are viewing apartments with plans to move in together. Carrie falls in love with a penthouse far from their price range. Big immediately agrees to pay for it. Carrie offers to sell her own apartment, although she also voices her fear that she would have no legal rights to their home in case they separate, as they are not married. To quell her fears, Big suggests that they marry. Carrie announces the news to her friends. Charlotte hires her a wedding planner.

Miranda confesses to her friends that she has been so busy she hasn’t had sex with Steve in six months. When Steve confesses he has cheated on her, Miranda is devastated and immediately separates from him. At Carrie and Big's rehearsal dinner, Steve tries to reconcile with Miranda, but she rebuffs him. Still upset with Steve, she tells Big bluntly that marriage ruins everything.

On the wedding day, Big is too fearful to go through with the ceremony. Carrie, devastated, flees the wedding. Samantha stays behind to clear the guests. Big changes his mind and catches up with Carrie in an attempt to reconcile. Carrie furiously attacks him with her bouquet while he earns scathing looks from Miranda and Charlotte. To console Carrie, the four women take the honeymoon that Carrie had booked to Mexico, where they de-stress and collect themselves.

Upon returning to New York, Carrie hires an assistant, Louise, to help her manage her life. Miranda eventually confesses to Carrie about what happened at the rehearsal dinner, and the two briefly fall out. After reflecting on the argument she had with Carrie, Miranda agrees to attend couples counseling with Steve, and they are eventually able to reconcile. Samantha finds her five-year-old relationship humdrum and begins over-eating to keep from cheating on Smith. She eventually realizes that she needs to put herself first, so she says farewell to Smith and moves back to New York. Around the same time, Louise quits her job as Carrie's assistant to get married.

Charlotte learns she is pregnant, and for several months is fearful that something might happen to her baby. Carrie put her fear to rest. Later, Charlotte has a surprise encounter with Big that leaves her so outraged that her water breaks. Big takes her to the hospital and waits until baby Rose is born, hoping to see Carrie. Harry passes on the message that Big would like her to call him, and that he has written her frequently, but never received a reply. Carrie searches her correspondence and finds that he has sent her dozens of letters copied from the book she read him before their wedding, culminating with one of his own where he apologizes for screwing them up and promises to love her forever.

Carrie travels to the house Big had bought for them to collect a pair of Manolo Blahnik shoes she had left there. She finds Big in the walk-in closet he had built for her, and the moment she sees him, her anger at his betrayal dissipates. They share a passionate kiss, and Big proposes to Carrie properly, using one of her diamond-encrusted shoes in place of a ring. They later marry alone, in a simple wedding in New York City Hall, with Carrie wearing a simple dress. Miranda, Samantha, and Charlotte turn up to surprise Carrie. The film ends with the four women sipping cosmopolitans, celebrating Samantha's fiftieth birthday, with Carrie making a toast to the next fifty. 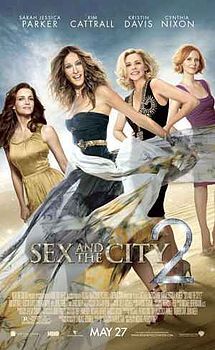 Sex and the City 2 is a 2010 American romantic comedy film co-written, produced and directed by Michael Patrick King. It is the sequel to the 2008 film Sex and the City, which is based on the HBO TV series of the same name.

The film was released in cinemas on May 27, 2010, in the United States and May 28, 2010, in the United Kingdom. The film stars Sarah Jessica Parker, Kim Cattrall, Kristin Davis, Cynthia Nixon and Chris Noth, who reprised their roles from the previous film and television series. It also features cameos from Liza Minnelli, Miley Cyrus, Tim Gunn, Ron White, Omid Djalili and Penélope Cruz, as well as Broadway actors, Norm Lewis, Kelli O'Hara, and Ryan Silverman. It received negative reviews from critics, but was a commercial success.

The film begins with Carrie, Samantha, Charlotte, and Miranda meeting up with each other which turns into a flashback to how Carrie arrived in New York City in 1986, then met Charlotte one year later, Miranda in 1988. She also met Samantha, when she was bartender at a bar but she doesn't tell a year.

All are married but Samantha, who at 52, is desperately trying to keep her libido alive with the help of "Suzanne Somers and her team of doctors" to keep her menopause at bay. The four of them attend Anthony and Stanford's wedding, where Carrie serves as "best man." Miranda quits her job after the new managing partner disrespects her once too often. Charlotte's two children are a handful and she's worried that Harry is attracted to their buxom Irish nanny, Erin. Carrie's marriage to Mr. Big has settled down, though they differ on how to spend their spare time. For their anniversary, Carrie gives Mr. Big a vintage Rolex watch engraved with a romantic message, while he, much to her dismay, shows her a new TV in their bedroom as his gift, which Big says they can use to watch old movies together, something they did at the hotel at Anthony and Stanford's wedding and seemed to enjoy. Carrie, however, is disappointed, as she had hoped for jewelry as a gift.

Meanwhile, Samantha has been approached by an Arab sheikh to devise a PR campaign for his business. He offers to fly her and her friends on an all-expenses-paid luxury vacation to Abu Dhabi. The girls happily accept, although Carrie is worried about the separation from Big and Charlotte is worried about leaving her husband alone with the nanny. Only Miranda, unfettered by a job for the first time in her life, is enthusiastic. Upon entering Abu Dhabi, Samantha's hormone-enhancing drugs are confiscated under UAE law. This renders her devoid of estrogen; her famous libido goes dead. Charlotte tries to call Harry every few minutes; Miranda revels in the luxury surrounding her, while Carrie befriends her manservant, Gaurav.

Carrie runs into her former lover, Aidan. He proposes dinner à deux at his hotel and she decides to meet Aidan for dinner. The dinner is very enjoyable, with the two discussing old times. Aidan remarks on the ways Carrie is "not like other women". In a moment of remembered passion, they kiss. Carrie runs away in panic and returns to the hotel. Back at the hotel, Miranda and Charlotte have drinks together and discuss the difficulties of motherhood. Carrie arrives, tells her friends about the kiss, and asks them whether she should tell Big, as they have no secrets between them. Miranda reflects on the events of the previous film, when her husband, Steve, told her about his affair. Samantha counsels Carrie to wait before deciding anything. Carrie opts to call Big to tell him. Big is silent upon hearing the news, and after saying a few words, hangs up.

The four women find their style and Western attitudes contrast with Muslim customs. While on a date with a handsome Dane, Samantha is arrested for public indecency after fondling him at a restaurant and making out with him on the beach. With the Sheikh's intervention, Samantha is released, but is left with a permanent police record. Worse, the Sheikh cancels the PR meeting and ceases paying for the women's luxurious perks. They quickly pack their bags and leave, but must return to the souq to find Carrie's passport. When Samantha's flamboyance nearly incites a riot, the girls are rescued by a group of Arab women who share their sense of style under their black robes.

When Carrie returns home, she finds the bedroom television removed and Big gone. She passes an anxious day, at the end of which he returns. Big tells her that although he was "pretty torn up", he realizes that what she needs is something to remind her at all times that she is married. He hands her a jewelry box, which reveals an engagement ring set with a black diamond. When Carrie asks him why a black diamond, he says, "Because you're not like anyone else", echoing Aidan's earlier comment.

The problems the women faced at the beginning of the film are resolved. Big and Carrie combine their interests; Charlotte's nanny, Erin, turns out to be a lesbian and is no threat to her marriage; Miranda finds a new job where she is appreciated, and Samantha stays the same, even meeting up with the Danish architect she met in Abu Dhabi for sex on the beach, this time a beach on The Hamptons.