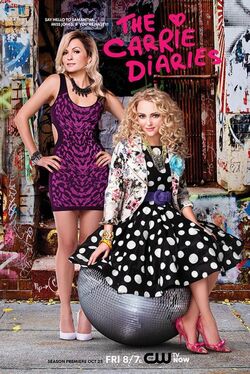 The Carrie Diaries is an American television teen drama. It is a prequel to the HBO television series Sex and the City and based on the book of the same name by Candace Bushnell. The second season of the show focuses on Carrie's job at interview magazine developing, and her growing up into a woman.

It's the summer of 1985, and, for the first time, 17-year-old Carrie Bradshaw can call Manhattan home. After her boyfriend Sebastian and best friend Maggie betrayed her, Carrie is happy to accept the offer to spend the summer living in the downtown loft apartment of her Interview magazine boss Larissa. But as summer turns to fall and Carrie heads into her senior year, she and her friends and family discover that letting go of old love and embracing new dreams comes with some tough new realities but also incredible new opportunities.